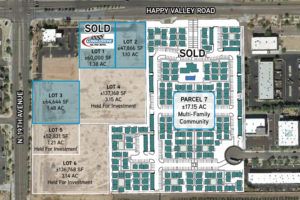 DAUM Commercial Real Estate Services has assisted in the completion of three land transactions encompassing a total volume of $20 million and 47 acres in the Deer Valley submarket of Phoenix, Arizona.

Jenkins, Keeley, and Bob Lundstedt, First Vice President at DAUM, simultaneously negotiated the sales of two portions of the same land parcel to two separate buyers. Both sales closed on the same day as the acquisition in a complex triple-escrow transaction, according to Lundstedt.

“BASED ON OUR EXTENSIVE EXPERIENCE IN THE DEER VALLEY MARKET AND HISTORY WITH THIS SPECIFIC LAND SITE, DAUM WAS ABLE TO SECURE MORE THAN 28 ACRES OF DEVELOPABLE LAND FOR ACQUISITION AT A HIGHLY COMPETITIVE PRICE, IN THE LARGEST LAND TRANSACTION IN DEER VALLEY SINCE 2009 IN BOTH ACREAGE AND DOLLAR VOLUME,” EXPLAINS LUNDSTEDT. “THE BUYER STRATEGICALLY CHOSE TO IMMEDIATELY DISPOSE OF APPROXIMATELY 18.5 ACRES OF THE LAND IN ORDER TO DECREASE THE AMOUNT OF CAPITAL INVESTMENT NEEDED UPFRONT, AS WELL AS FACILITATE A SMOOTHER PROCESS AS THEY PREPARE TO BREAK GROUND ON A MODERN, ‘LIVE-WORK-PLAY’ MIXED-USE DEVELOPMENT.”

In the first sale, Lundstedt and Keeley represented Garrett as the seller in the disposition of 1.38 acres of the newly acquired 28.8-acre parcel to the buyer, Cobblestone Carwash, who was represented by Chris Stamets and Brian Gausden of Western Realty Advisors.

The second sale involved Lundstedt and Keeley representing both Garrett as the seller and the buyer, ELUX Deer Valley LP (Snowdon Residential-Harvard joint venture) in the sale of 17.15 acres of the 28.8-acre parcel for future multifamily development, which is planned to include 212 Casita Style units and a Club House, notes Lundstedt.

“The Garrett property will benefit from being across the street from the USAA campus with 4,700 employees, as well as the new Union Park at Norterra, which includes 1,100 single-family homes, 1,100 multifamily units, a school site, and specialty retail corridor,” says Lundstedt.

Jenkins notes that this highly complex transaction would not have been possible without cooperation of all parties, including the seller of the 28.8 acres, who allowed for a long escrow to facilitate the negotiations.
According to Lundstedt, DAUM has sold six land sites in Deer Valley within the last 12 months, totaling $33 million and currently controls 75 percent of the deliverable land parcels in the Deer Valley market.

This was Lundstedt’s 144th land transaction in the I-17/Deer Valley market since 1997.

The land parcel involved in the three transactions is located on the Southeast corner of the intersection of Happy Valley Road and 19th Avenue in Phoenix, Arizona.